I am writing from the office in our newly-shared apartment, the one you haven’t seen yet. Christine sends her best. Books scatter and stack, every day a new box opened, discovery. I don’t always know what I know. Squirrels carry leaves in their mouth, strike up back steps, deck, slip up the roof. It is different, to live with a woman.

Lately I’ve been trying to get Christine to read Sarah Mangold: “The moment snow pours out of you / bed,” she writes, in her An Antenna Called The Body. Instead, she pours through the late Daniel Jones, The Brave Never Write Poetry: “Never much needed a muse / when I had the beer; yet for so long / my fingers have been silent.” We relay, different points of attention. Articulation.

Lately, Robert Kroetsch has been on my mind again. A thin, clear, unspecific line. Less the writing, more the man himself. Everywhere, I see the dead. John Lavery, a nestle of scotch in the corner of Pubwells; Dennis Tourbin at the intersection of Bank and Somerset, where the old Lockmaster Tavern perpetually threatens collapse, strict folds.

Dizzy, what heights. Navigation, wind. A song room, sweetened. From our back maple, an edit leaves; red-filtered, fallen.

Not everything follows the centre. What you call center. And, and, and. My reading is perfectly alphabetized.

I don’t always know what I know, lessons learned in a cycle. Christine’s wayward collection of cds, her Carpenters tribute album on permanent repeat, rolling through these past three days. Already I know I’ve heard a more compelling version of one track, lisped into Mirrormask. Sometimes you just die, trying.

As Mangold writes, “One word could carry you through an entire novel.” I am trying to find that word.

What did Robert Kroetsch mean when he wrote “The spending lover both creates and fears the growing silence.”? I slip through Kroetsch, and end up amid pages of Smaro Kamboureli, in the second person: “My life seems to draw its own map, straight lines, and a few curves, that delineate the trajectory of my moments in ways I still cannot comprehend.” As though, by writing out the second person, she writes her whole self into being.

I am reading through your poems on Kroetsch, and speculate your trajectories. Where are you heading? Robert Kroetsch down through Mohawk Valley, threading the Hudson River all the way to Poughkeepsie. Airplanes and radio waves zigzag and spool. I take enormous comfort from your journeyings. But when might you drive again the six or eight hours north? 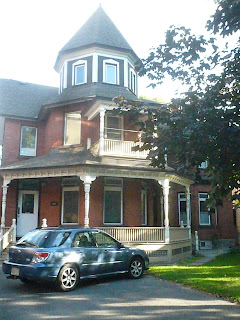 We live in a house, occupy but a fragment. Third floor. Still, an improvement. A room with a view and a couch you can use. In Either Way I’m Celebrating, Sommer Browning writes, “A house is an employment of trees; a crowd is a path to your door.” I have misplaced my Mangold, constantly thumbing and setting down.

The office warms, even as the city cools. The printer dims bulbs. Labyrinthine snow, we could never find egress. Clear, in fact. Apartment heat so strong, we haven’t yet required to close our bedroom window. Sometimes passing snowplows startle us out of sleep.

Christine has abandoned the shared office, requesting a corner of bedroom. I’ve since carved a corner for desk, laptop, bulletin board. She trades order for chaos and back again, constructing poems. A flurried precision. Sits with Kate Beaton’s Hark, a Vagrant. The difference between fractals and pinpoints, the way her light shines through history. It happened like this, and like this, and like this.

I am waiting for 1812 to begin its re-telling, flagrant in its variety. What your country has edited long out of existence.


Born in Ottawa, rob mclennan has lived in Centretown since 1990 (give or take a year). The author of more than twenty trade books of poetry, fiction and non-fiction, including Ottawa: The Unknown City and The Ottawa City Project, he spent the 2007-8 academic year in Edmonton as writer-in-residence at the University of Alberta. He regularly posts reviews, essays, interviews and other notices at robmclennan.blogspot.com.
Posted by Centretown Nonsense at 18:10

Centretown is by far the greatest neighbourhood. You should move there.

We are in Centretown and this is our nonsense blog. We believe in interesting writing.